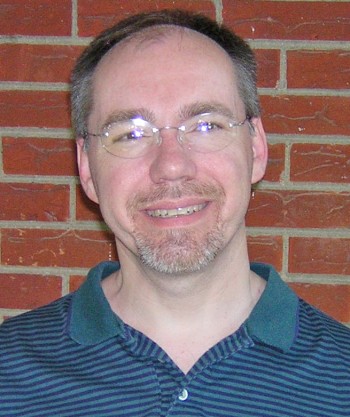 On June 29, 2014, First Mennonite Church (FMC) of Indianapolis, bid farewell to pastor Ryan Ahlgrim and his family. His 19 years of service at FMC included nine years of serving on the conference’s Church Life Commission (CLC), and then as the first chair of the Ministry Credentialing Team, one of the successors of the CLC. Before that he served on the Communications Advisory Committee for six years. All told, he made about 115 trips up and down US 31 between Indianapolis and Goshen, putting about 34,500 miles on his car over the years. I was privileged to represent conference at Ryan’s farewell celebration in June.
—Doug Kaufman, conf. pastor for leadership transitions

The following reflections come from people who knew Pastor Ahlgrim. They are excerpted here from MennoExpressions, a publication of First Mennonite Church, Indianapolis.

Alison Schumacher, MennoExpressions editor:
After 19 years of sermons, pastoral care, and keeping our congregation moving forward, Ryan and Laurie Ahlgrim are off to share their myriad gifts with Ryan’s next ministry assignment, First Mennonite in Richmond, Va. I appreciate his leadership, sermons and theological perspective, as well as his quirky and endearing qualities. He shares personal and difficult topics, trusting yet challenging us. And after hearing him mention that he often selected his ties for Sunday morning based on the sermon topic, I tried in vain to visually decipher the link between the theme and the tie.

While we cannot reduce Ryan’s gifts to us to mere numbers, his “stats” tell an important story too. Ryan was ordained in 1985, came to FMC in 1995, and since then, 175 people have joined FMC. Ryan has baptized 60 of them. He has married 40 couples and performed 11 funerals. He has preached over 800 sermons, given 86 lectures and Sunday school classes, and has had 89 writings published. Whew!

John Koppitch, Second Presbyterian Church, Indianapolis:
I was just beginning as the head of staff at Fairview Presbyterian Church when Ryan gave me a call, introduced himself and asked if I would be interested in forming a pastor support group. I welcomed Ryan’s invitation and slowly our small group of 11 formed. Ryan took responsibility for keeping everyone informed of the time and place of the next meeting. He was also our primary recruiter for bringing new pastors into our group.

I’ve always enjoyed Ryan’s intellect, creativity, candor, inquisitiveness, hospitality and pastoral sensitivity. And yes, I have to admit I even enjoyed his humor (as several of his stories have made their way into my own repertoire). I am grateful for his leadership in the larger church, through his involvement in the Mennonite Church and other ecumenical circles. But it is simply Ryan’s presence that I will miss the most—a trustworthy colleague and friend in ministry.

Mandy Yoder, Belmont Mennonite Church:
FMC was my very first pastorate and I learned so much from Ryan. I am grateful to him for the many ways he mentored me over the four years that I was on staff. Ryan is a strong leader and it was a great learning experience for me to see him lead the congregation through a process of discernment regarding whether to add on to the building or plant a new church.

Working with Ryan also helped me learn one very important thing: how to space the tables in the fellowship hall in order to seat the maximum number of people and still leave sufficient room between the tables. Ryan figures this out by bending at the waist and spreading his arms out so that one hand touches one table and the other touches the next table. Given that I’m a different build than Ryan, I guess that actually isn’t something I’ve carried with me, but it does highlight Ryan’s deep care for the church—from the macro-level things right down to the little details.

Dagne Assefa, Shalom Mennonite Church:
When Ryan started serving at FMC, I was in my third year at Shalom serving as half-time pastor. Ryan’s move to Indianapolis could not have been more timely for me as a new church planter and for Shalom. Not only did I have a colleague with whom I could share the joys and challenges of pastoral ministry, but I could also learn from his past church planting experiences, which he shared freely.

As a new and very small congregation, we were not more than 25-30 souls, including children. Ryan surprised me when he asked how I would feel if more FMC families joined us. Of course, I was very pleased to hear that come from him without my asking. More than a dozen households responded to Ryan’s encouragement to join us, initially for a year, then another year. After two years, almost all those families who came to Shalom felt God’s call to stay and grow with us.

Through the years our two congregations worked together on many different projects. Ryan also played a key role in the Mennonite pastors’ fellowship that met faithfully 3-4 times a year. Ryan will be greatly missed. Go with God, my friend!