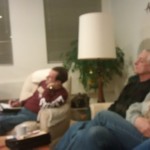 James Krabill, Mennonite Mission Network, spoke to pastors and spouses from northern Michigan on the theme of “Worship and Mission.” In this photo, Anna Troyer (Cedar Grove Mennonite), Leighton Miller (Wildwood Mennonite) and JD & Debbie Livermore (Germfask Mennonite) listen during one of James’ presentations. Sessions led us to think about the connections between worship and mission. Out of his research on the topic, James encouraged congregations to think about writing songs to tell their own stories of God’s activity among them, rather than only singing other people’s songs. He also encouraged us to think about ways worship is trans-cultural, contextual, counter-cultural and cross-cultural.

As always, there was plenty of laughter, and included a meaningful time of prayer and anointing for each person.