Holy Spirit springs a surprise on MYF in Nappanee

Without warning, they began showing up. 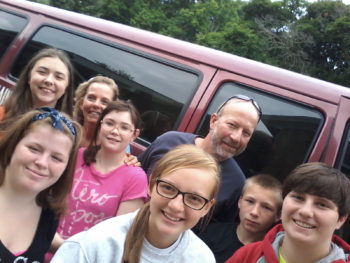 The influx of neighborhood kids more than tripled the Wednesday evening youth group. Typically, no more than a half dozen other churched teenagers usually attended the MYF, which served youth from First Mennonite Church, as well.

“All of a sudden, we had 33 kids in our church basement, and they were bouncing off the walls,” said Ruben Chupp, pastor of North Main Street Mennonite. “We didn’t know for sure what was happening, but we did agree on one thing: This was the Holy Spirit’s doing, and we didn’t want to do anything to screw it up.”

Evidently, they have cooperated with the Holy Spirit, as the exodus from trailer park and city neighborhoods has continued to flow into MYF. The Holy Spirit had some help from Asia Marsh, a youth from First Mennonite, and Donna Weaver, a 72-year-old grandmother and a former MYF sponsor.

Marsh invited some kids from her trailer park to the gatherings. Weaver, a former MYF sponsor, lives near an apartment building downtown, where she hangs out with some of the kids at a coffee shop.

“Both Asia and Donna established relationships with these kids, and we trace what has happened to those friendships,” Chupp said. “They threw a stone in the lake and created all these concentric circles.”

The concentric circles have stirred the waters with new life, and new challenges, said Sandy Slabaugh, youth sponsor with her husband, Bruce. They served as sponsors in the 1990s and had to adjust to the challenges of today’s unchurched youth when they returned as sponsors last fall.

They minister to the teenagers with youth pastor Corben Boshart, an intern from Anabaptist Mennonite Biblical Seminary, and Slabaugh’s daughter, Mariah, and her boyfriend, Ryan Menzie.

“They bring a lot of issues, you name it, sex, drugs, physical, mental and emotional abuse,” Sandy Slabaugh said. “We provide a safe place where we listen to them and feed them a good meal.

“You can’t learn if you are hungry, and we try to fill them up both physically and spiritually before they go home. Kids were coming directly from school to church; however, no one was there to provide supervision until 6pm, so we felt it necessary to lock the building until an adult could be present.”

When the doors open, the kids find a peaceful and prayerful alternative to their oft-drama-filled homes, and a new hope for their future. “We want to try to help them envision a different life for themselves – graduating from high school, going to college,” Sandy Slabaugh said. “We don’t really have a blue print for this but are simply trying to go where God takes us.”